How The World Came To Run On Ink And Printing?

Today we take for granted that we can print any document we wish from pretty much any device we want at the click of a button – even while working remotely. We have to face it – in today’s society, it is impossible to be completely printer-less. Our shipping labels, boxes, driver’s licenses, credit cards, stamps, and money are all printed. Despite the initial excitement over ebook technology, print materials continue to outstrip sales of digital copies. In 2020, printed editions accounted for around 80% of total book sales.

The truth is that printing is an essential building block of modern society. It is supported by a rich history that has improved worldwide literacy rates, increased communications and recorded data, and paved the way to modern computer printers and copiers across the business corporate environment. All of these changes have increased the need for managed print services to enable companies to more efficiently manage all of these devices across their in-office and remote staff scenarios.

But how did ink and toner come to dominate the business and home device printing world that we know today?

Where it all began 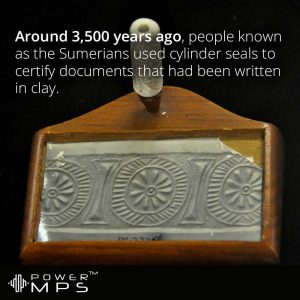 The first invention that we can classify under a version of printing was over 5,000 years ago, in the era that saw the wheel invented. Around 3,500 BC in the southernmost part of Mesopotamia – the land now known as southern Iraq from Baghdad to the Persian Gulf, the people known as the Sumerians used cylinder seals to certify documents that had been written in clay. The seals were round beads carved in reverse, typically around 3-4 inches in length. A single person owned each seal. They were often worn around the person’s wrist or neck as a decoration when not in use.

While the invention of paper is credited to Ts’ai Lun, a Chinese eunuch court official in 105 AD, block printing on paper did not become prevalent until around the 7th century. At this time, Buddhists used the method to create religious texts as ritual items. The oldest known printed book is The Diamond Sutra, a Buddhist text created sometime around 868 AD. Woodblock, and later metal block, printing spread worldwide in the coming centuries, leading to a growth in Buddhism as well as “The Golden Age of Islam.”

“Modern” printing shakes up the game

In Hubei, China, around 1000 AD, a man named Bi Sheng did something unusual. He created individual letters out of clay and baked them into hard, reusable blocks that could be arranged onto an iron frame. Nearly three hundred years later, Wang Chen, a Chinese magistrate, built further on Bi Sheng’s concept by creating a durable wood version of these blocks, built on a revolving table to increase the speed and efficiency of the printing process. [https://www.history.com/topics/inventions/printing-press]

The European version of movable type, the Gutenberg press, was invented in 1440 by Johannes Gutenberg. Rather than wood blocks, Gutenberg created more reliable metal printing blocks for each individual letter. The letters were cast using a uniform outer mold that would allow each piece to precisely and uniformly fit together into level lines.

The result was a mechanical device that puts pressure on a customized, inked surface resting on paper or cloth to transfer the ink. The Gutenberg press cut printing times exponentially – reducing the printing time for a 1,300-page Bible from ten years to a single week. Gutenberg himself printed 180 Bibles in less than four years.

However, the inks of the time were water-based – designed for wood and clay, both of which soak up and store pigment in a similar manner to paper. The same inks did not sit well on metal plates, sliding off and creating drips that distorted printing. Gutenberg had to create an oil-based ink, more like a varnish or oil paint that would stay on the plates until pressed onto a flat surface to make his press work. Similar inks, all specially designed to work with specific types of metal components and modern technologies are still used in printers and ink cartridges today.

*Fun Facts: The cost of the initial Gutenberg Bible was equal to around $200,000 in today’s US Dollars.  49 of the 180 Bibles Gutenberg printed still exist today.

Changing The World Through Printing

Despite Gutenberg’s invention, eastern countries such as China, Japan, and Korea still used their original woodblock printing processes for several centuries. But the additional time it took to mass-produce texts with this method did not reduce its impact on the area’s culture and education. In 1600s Japan, the availability of texts contributed to a high literacy rate – with even farmers of the time boasting a 50-60% rate of literacy.

Before the invention of the Gutenberg Press, literacy rates in Europe hovered around 30%. In the four centuries following, the rate climbed to 62%. The increased production of written materials and education spreading from Europe and Asia concurrently created an unintentional intellectual movement across continents. Today the average world literacy rate sits around 84%.

The invention of the printing press did far more than improve literacy rates. It facilitated the sharing of ideas across cultures, which influenced politics, changed religions, and led to vast improvements in technology, education, and society.

In addition to a movement in education and sharing of ideas, the invention of the printing press also created a larger demand for printed materials such as newspapers, magazines, and books. These items quickly became a popular part of modern society. But it wasn’t for another 300 years when, in 1837, Charles Babbage designed the first mechanical printer, that printing technology became an integrated part of the workforce. Only 31 years later Christopher Sholes would invent the typewriter and suddenly ink, printer, and copier management became a key part of managing any business.

For the next hundred years, the typewriter would see a series of upgrades from large, unwieldy machines to portable electric contraptions. In the late 1950s, these handy machines were coupled with the Xerox copier and, eventually, the Dot Matrix Printer to create documents and then reproduce them en masse for use in a multitude of office tasks. All of this led to a flurry of new printing innovations – aiming to be faster, more accurate, and more efficient. Today nearly every company has a printer, often more than one, and usually of varying sizes, styles, and brands.

The rise in office computer printing, copiers, and other print technologies, multi-printer offices has created a challenge for companies in managing their printing materials, machines, costs, and capabilities. The increase in remote workers, companies with satellite locations, and the “paperless” office have only added to these issues. It would not be until 2020, with the creation of PowerMPS, that businesses would have a solution to manage all of their print devices seamlessly. Just as printing and printed materials have become an essential part of our society, print management is quickly becoming a fundamental requirement for efficient office and workspace administration. 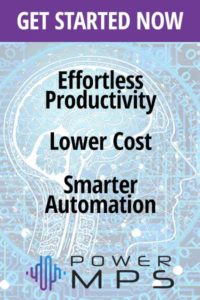